Extracts from the book

****
(Extract from Chapter I: The Foundations of your Marriage)

Although you may not be aware, when you express your love, what you are really doing is implementing a natural intention to  reap the benefits brought brought about by the relationship to make your contribution to preserve and advance humankind.

****
Romance is the basis of marriage and the primary evolutionary force that binds couples together. It is the vehicle that nature uses to lure us, humans, into sex, procreation and advancing our Species – when romance is missing, happiness is removed from the relationship.

During the early stages of the relationship, romance exhibits mostly as sexual attraction, and it is the main reason relationships are formed. Its alluring powers rest primarily on the attachment it creates, and it is indispensable to build satisfying relationships because they shape our feelings. It creates an idealisation of our partners during courtship, which tends to perpetuate throughout marriage.

As couples progress into the “protracted-affection” phase of the relationship, sex encounters are typically less frequent, but this does not announce a decline in romantic feelings. Sex is relegated to a less important role without affecting the good functioning and loving bonding of the relationship because romance continues; expressed differently. A successful transition between sexual to more platonic romance is crucial, and it is achieved by perpetuating psychological affection, expressed in the form of hugging, kissing, playful touching and verbal expressions of love. You cannot have a happy marriage unless you deliver these requirements on a daily basis. The effort, time and money you spend on romantic gestures and events are a primary investment in the success of your marriage.

To live in harmony it is essential to implement effective communication. But this is not equivalent to solving problems, in fact, the belief that to have a happy relationship, we need to learn to work out our differences can be, and too often is, not only unnecessary but highly damaging to marriages. The traditional school, unfortunately still widespread, followed the underlying assumption that if you could identify what is wrong with couples, and train them to solve their differences, conflict would be minimised. It was even suggested that solving conflict could contribute to partners becoming closer and strengthening the relationship.

It is obvious however, as reflected in the still alarmingly high rate of divorce, that conventional counselling has been less than effective.

The real underlying shortcoming of this approach, still oblivious to most modern Practitioners, has been ignoring the potentially strong, negative influence that focusing on solving problems can have on the attitude of spouses. A mentality of focusing on the negative encourages a tendency to believe that problems are inevitable; this belief in fact leads spouses to unintentionally create conflict unnecessarily – when you focus attention on solving problems, you are contributing to creating them.

The real power of communication lies not in learning to deal with conflict, but to avoid conflict in the first place before it is created. This is achieved by training couples in three main disciplines: understand and adjust to the difference between emotional and rational intelligence; avoid addressing problems unnecessarily; and learn to recognise and control defective thinking habits.

****
Inappropriate thinking is the single, most important cause for marriage breakdowns. It is the main underlying reason partners feel at odds or antagonistic towards each other. Negative thinking refers to thoughts that contain intentions to confront, hurt, antagonise or deal with problems. In fact, any thought that arouses feelings of discomfort can be potentially damaging and should be considered as negative. It may involve thinking about past disputes, criticising your partner with your thoughts, having mental dialogues about negative things you want to tell your spouse, or perhaps thoughts about negative expectations.

Your training will involve learning to control negative thinking. Although seemingly complicated at first sight, modifying inappropriate thinking can be simple if you are willing to adopt a practical attitude and follow some basic cognitive strategies. In essence this involves learning to identify thoughts that cause conflict in your marriage and dismiss them from your mind using the recommended strategies. It will be the main theme in the fourth Golden Rule of Marriage. This rule dictates: “Never hold negative thoughts towards your partner or about your relationship”, and it is the most important of all golden rules. Relevant strategies are contained in Chapter IV.

****
(Extract from Chapter III: Faithfulness, and how to promote it)

The old manuscript then offered some interesting remarks on unfaithfulness. It read: 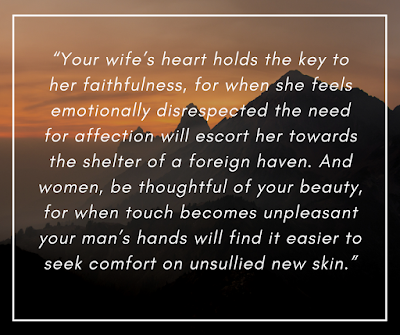 The secrets to inspire fidelity reside basically on two essential conditions: a man’s ability to cater for his partner’s needs, and a woman’s skills to keep her man interested in her.

What leads to unfaithfulness is different in men and women. Most women accept an outside lover mostly when they feel uncared for, neglected or ill-treated by their husbands, and most men are more prone to be adulterous when they stop finding their female partners attractive or stimulating. To promote faithfulness in your relationship you must avoid these neglects and adhere to some crucial obligations. Men’s primary duties comprise of being consenting, good providers, empathetic listeners, and efficient sex partners. These are means to satisfy their wives’ financial, emotional and sexual needs. A husband who has been efficient at these tasks will have gained his wife’s loyalty, and virtually eliminated the need for her to look for these fulfilments elsewhere.

Women will significantly reduce the risk of unfaithfulness by properly attending to their looks and sex appeal. Together with providing a relaxed home environment and complying with their duties as wives, it will prevent their husband from having thoughts of unfaithfulness, reducing the risk of acting on them.

Male and female duties will be covered in depth in Chapter V.

****
(Extract from Chapter IV: The Rules of Marriage)


The old manuscript started with a simple but very enlightening assertion: 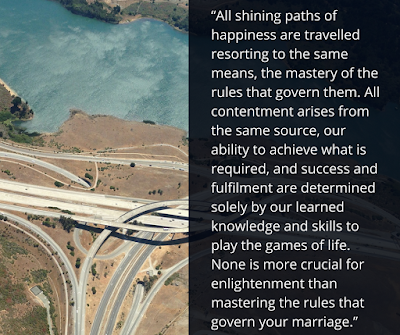 The message was simple and straightforward: “You are only as happy as you are efficient at achieving your wishes; and none is more crucial than achieving what is required to have a successful relationship”. It was a very profound concept, applied not only to relationships but to life itself. Linda was well aware of it. She wrote:

Life is but a composition of different “games”, each one played to achieve goals connected to seven broad areas: the seven shining paths. In order of importance, these life areas refer to: our relationship; being happy with what we already posses; a rewarding occupation; good health; altruism; mental fitness; and wealth.

The success of your marriage depends on learning the methodology to be an efficient spouse, and the Golden Rules are the “Instruction Manual” that contains the “know-how”, effectively transforming the seemingly difficult task of living together into an easy, highly enjoyable activity.

The rules of marriage are essentially techniques, strategies aimed at understanding what governs a relationship and implementing the most efficient methods to make it functional and happy. Do not underestimate the power of techniques, they are the technology of success, and can transform difficult tasks into easy ones.

The most common mistake spouses make is to take their relationship for granted; to believe that they can concentrate on their work, finances, the children, and give less attention to the relationship. This is a malady of epidemic proportions and a major reason for the high rate of divorce; given the choice of staying back at work to earn some extra money or at home sharing time with the family, the former is too often the selected option; confronted with the choice of spending on the children or on the partner, children typically receive the benefits; faced with the option of having a romantic weekend away or staying home to save for the new kitchen, the house usually wins. It is often too easy to fail to recognise that these actions constitute neglect; and not a minor overlook but a failure to properly attend to the functioning of the very core engine of life; when you consider that your relationship is the main source of satisfaction in your life and that the state of your marriage affects all other areas, this is indeed neglect on a major scale.

Building a happy marriage requires practical thinking and following the guidance of common sense rather than righteousness. The concept of equality (what is fair or not) does not apply in marriages; what counts is that household tasks are conducted efficiently and that personal needs are properly satisfied, regardless of who-does-what.

Tasks and obligations are rarely evenly distributed; but this inequality should not be a cause for discontent. In a large study involving 576 couples, whose marriages were intact after 50 years or more, it was noted that one of the components of the bond that helped keeping happy couples together was their willingness to give without expecting retribution, and that although they were not giving and taking in equal measures, there was a realisation that over time, this tended to balance out

Golden Rule Three refers to personal habits and differences between spouses, and the role this incongruity plays in the attraction that you feel for each other and in your marriage.

Here is how the old manuscript explained it:

Linda then expanded on this crucial issue. She wrote:

A powerful motivational force to seek a relationship is the need to associate with someone who can provide means to supplement and expand on one’s aptitude; with the concealed purpose to facilitate fulfilling our needs. Even though you were not aware, this was one of the main reasons you sought a relationship; finding a compatible partner was a pursuit for the extra resources your partner could bring to generate benefits.. 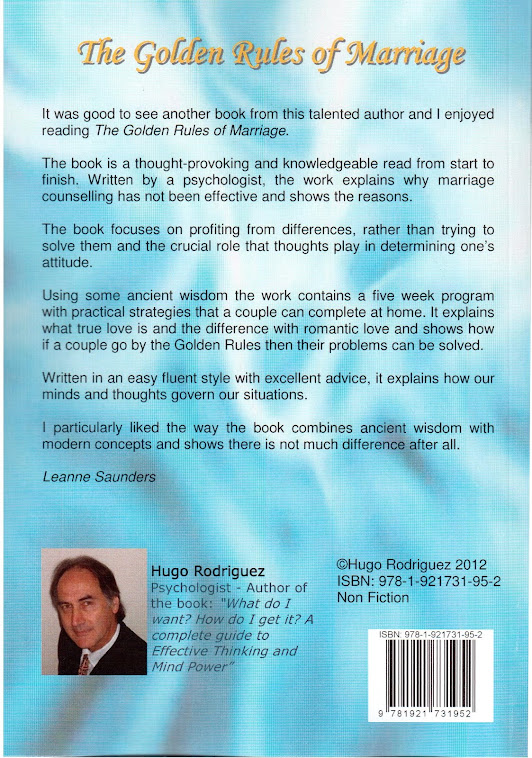